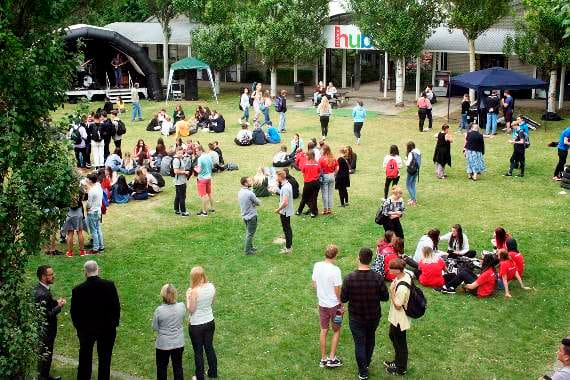 NEW students starting in September, from more than 50 different schools across four counties, were given a taste of studying and daily life at Alton College’s annual WelcomeFest event, held on campus in July.

They will be the first intake to enjoy the new timetable which, from September, will start from 10am each day.

The morning of the WelcomeFest was designed to enable students to explore their subject areas through inspiring taster lessons and practical hands-on activities. The afternoon provided a free barbecue lunch and ice cream while current music students performed on stage for the chance to play on the ButserFest stage at the Victorious Festival in Portsmouth in August.

There were also More Able and Talented talks in the afternoon, the opportunity to try out for the sports teams, and the chance to talk to Unloc about enterprise and entrepreneurial days and short enrichment courses.

Whitehill & Bordon's incredible transformation is the result of a strong partnership

Alton College’s next intake of school leavers appeared to enjoy the unique welcome day where staff and current students create a festival atmosphere on campus to help familiarise them with the environment, meet their teachers, make new friends, and better understand the transition from school to college.

During the morning, students attended lessons in their chosen subjects to get a feel for college study and enjoyed talks and practical activities. They then re-grouped for a welcome talk and presentation from the college leadership team, highlighting the exciting plans for the new college day.

The new day is an innovative, fresh approach to timetabling which is grounded in academic research that proves older teenagers learn better later in the day. It gives up to 50 hours more teaching time per year, allows more time for extra-curricular activities and work experience, and means students start at 10am each day.

The battle of the bands was the final event of the day with participants from the music department judged by John Geoghegan, from East Hampshire District Council, and Alton mayor Dean Phillips.

The judging panel deemed both bands worthy of a slot on the ButserFest stage, so they will both perform at the Victorious Festival.

New student Martha Kingsley, previously at Eggar’s School in Holybourne, said: “Following the WelcomeFest I feel confident that Alton College is definitely the right place for me to study to succeed. The formal, structured morning sessions followed by the more relaxed afternoon was a perfect introduction to college life.”

Isaac Longman, from Amery Hill School, described the day as “amazing”. He said he was made to feel very welcome and particularly enjoyed the subject taster sessions, adding: “The lessons were great, I feel more confident that I’ve made the right course choices for September.”

Alton College principal Sara Russell said: “We look forward to this unique event all year. Students tell us they thoroughly enjoy the structured morning in taster subject lessons run by our specialist experienced staff and then the chance to relax in the afternoon with festival style food and music. Our amazing student mentors are a credit to the college and they are always on hand to meet the new students.

“I wish them all the very best for their GCSE results and remember we are here for advice and guidance all summer. We look forward to seeing them all at enrolment in August.”