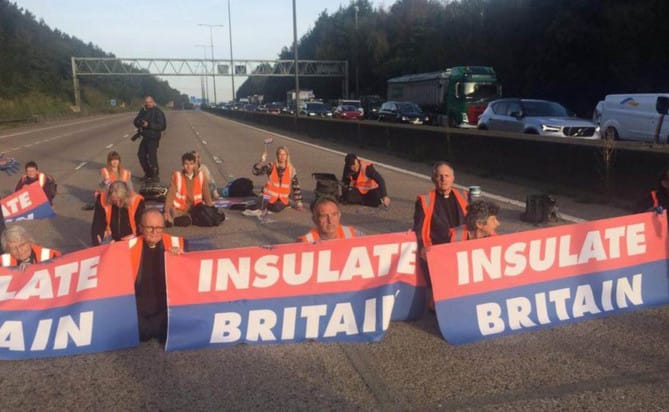 CLIMATE campaigners in Waverley have hit out at Surrey Police after the force appealed for help "building a case" against the Insulate Britain protesters who targeted a number of junctions of the M25 and M3 in September.

During the four days of activity on Surrey’s roads, 38 protesters - calling for a national programme to ensure homes are insulated to be low energy by 2030 - were arrested on suspicion of a variety of offences.

These included criminal damage, causing danger to road users, wilful obstruction of the highway and causing a public nuisance.

Surrey Police has since put a dedicated team of officers on the case, and has appealed for anyone who suffered a "serious personal impact" as a result of the disruption to come forward and give evidence.

Review: The weird and frightening world of Neil Gaimen comes to The New Victoria

Temporary Detective Sergeant Steven Cassidy said: "My team is continuing to work tirelessly to collect evidence to ensure anyone breaking the law is brought to justice."

But the force’s actions have been criticised by Extinction Rebellion Waverley and Borders branch.

Chris Neill, of XR Waverley and Borders, said: "This is wrong on so many fronts. The police are supposed to be protecting us, the public. They shouldn’t be used as an instrument of the state.

"Insulate Britain protesters were filmed protesting at the scene and arrested. They weren’t hiding their identities or what they were doing so why is Surrey Police ’collecting evidence’? It seems to me it is just trying to build public anger against climate change protesters and, if anything, it will have the opposite effect.

"The right to protest is a fundamental part of our democracy and attempts to criminalise peaceful protest will engage support from everyone across all society."