Peace and harmony at Jalsa Salana 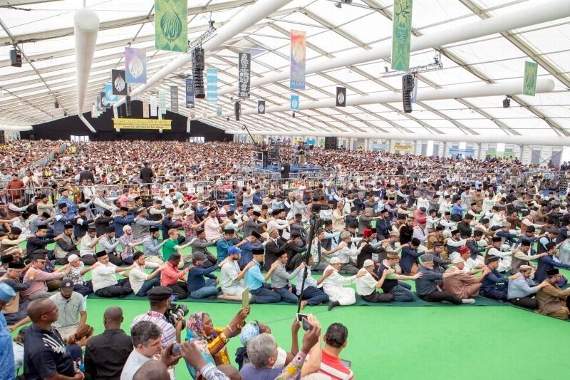 Attracting delegates from around the world, this was an opportunity for spiritual refreshment and to recommit to working for the common good and for global peace - a message best captured by their motto: “Love for all, hatred for none”.

According to spokesman Dr Basharat Nazir, this year’s Jalsa called on Ahamdi Muslims to become “ambassadors for peace”.

In a cry for “jihad that is unlike any other”, the worldwide head of the Ahmadiyya Muslims, His Holiness Hazrat Mirza Masroor Ahmad, told adherents: “At a time of worldwide conflict, we should remember this basic principle that it is better for all forms of evil and cruelty to be suppressed and for all forms of goodness and humanity to be endorsed.

Anstey Junior School in Alton lays flowers for the Queen

“In this way, evil will not spread far, while virtue and peace will spread far and wide and adorn our society. If we promote the good that is happening in the world, we can overcome those who seek to undermine our cherished values of mercy and humanity.”

As the Jalsa drew to a close on Sunday, His Holiness took from his global community a pledge of allegiance – known as the Bai’at - a simple, solemn and emotional ceremony that saw tens of thousands of Ahmadi Muslims physically link up to form a human chain that stretched out across the 210-acre site.

Simultaneously translated into more than 15 languages, the pledge was broadcast around the world so that Ahmadi Muslims, wherever they were, could follow the Caliph as he led the jihad for peace.

Now in its 13th year, Jalsa was referred to by Mr Williams as “Hampshire’s best-kept secret”.

“Everyone is welcome, there’s no trouble,” he said.

“I wish more people knew about the Ahmadis. It’s not well known. We hear about the controversy but you don’t hear the good news. It’s an uphill struggle because the media like drama.”

And Mr Gardner said: “It’s absolutely enthralling. This is my first visit, it will not be my last.”

Of the pledge, Nasser Ahmad Khan, a convention delegate who volunteers with Humanity First, the community’s disaster relief programme, said he believes the UK is one of the greatest countries in the world - stating that the level of diversity, thought and tolerance in the UK, even post Brexit, would not be allowed in his home country.

Sara Khan, a Sunni Muslim, has just been appointed lead commissioner for the new Countering Extremism Commission and is currently assessing the scale of the problem that will include far right and far left extremism. She will report her findings to the Home Secretary and then develop a strategy to counter extremism.

She said: “Extremism threatens religious pluralism. At its core is intolerance and hatred of others, which leads to the dehumanising of others. I am very patriotic and incredibly proud to be a Brit and to contribute positively to our country.”