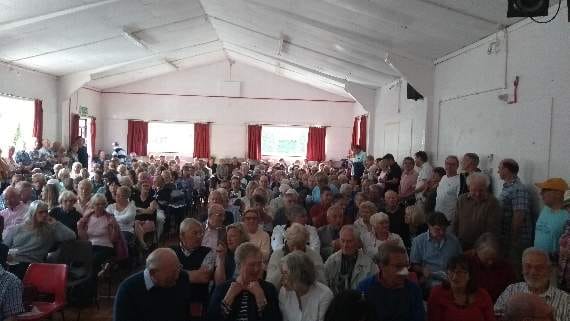 While less than half could be accommodated in the hall, the rest stood in the hallway and out in the car park, listening through doorways and windows, and to a Facebook streaming video set up by district councillor Jonathan May.

Four of the proposed ten sites for 600 or more homes in the next Local Plan are located in Four Marks and South Medstead, with one partly in Ropley, while a ‘new village’ of 1,200 is proposed at neighbouring Chawton Park Farm.

Called by district Cllr Ingrid Thomas, the meeting was chaired by Four Marks parish Cllr Simon Thomas, who told the Herald: “After over a decade of continuous housing developments in Four Marks and Medstead, the local residents feel under attack from all sides, lacking in crucial infrastructure and facilities, with the villages’ social cohesion threatened.”

According to Mr Thomas, local district and parish councillors had requested that one of EHDC’s Alton drop-ins be moved to Four Marks and Medstead, but EHDC was unable to oblige.

Determined to keep residents informed, councillors organised their own meeting, with information on all ten sites from the EHDC website, but with no developers’ staff to offer explanations.

District councillors for Four Marks, Medstead, Chawton and Ropley and representatives from all four parish councils gave a brief overview of the Large Sites Consultation, answered planning questions and gave tips on how to comment on each of the ten sites.

Said Mr Thomas: “It is vital that the local residents make their views known to EHDC, both objecting or supporting.”

To ask further questions directly to the developers promoting these sites, the next Large Sites Consultation drop-in event is this Saturday, September 14 from 10am to 2pm at Alton Assembly Rooms.

Complete the consultation online at www.easthants.gov.uk/large-development-sites-consultation.