The Bedfords' arrival in a blizzard 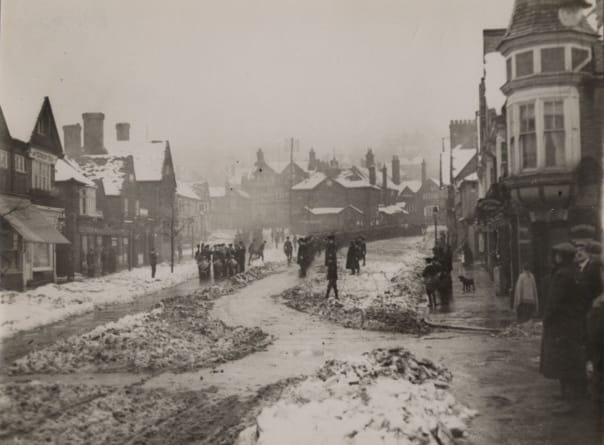 Get household items fixed at the Alton Repair Cafe

"Soldiers from the Bedfords regiment in the High Street and Church Green. We believe the men are the 7th Bedfords, part of Lord Kitchener’s Army (K2)," writes Rhiannon.

"Raised in September 1914, from February 25, 1915, they were on the order of battle of the 18th (Eastern) Infantry Division, based in Colchester, and went to France in July 1915. Based on the uniform and weapons that can be made out in the image, we believe the men are from a militia battalion.

"The parish magazine for St Bartholomew’s Church, Haslemere, stated the Bedfords arrived in January 1915: ’The coming of the Bedfords has brought a new and stirring interest into the life of the town... and since the war began, the camps have begun to circle us round in all directions.

"’Now the 7th battalion of the Bedford Regiment have made this their headquarters for a few weeks, and they have found here a hearty welcome. They came with an excellent record from Liphook, and they have taken Haslemere by storm. A few find their way to the halls, where baths and billiards are ready for them; but most seem too comfortable in their billets to care to sally out in the evening.

"The first Church Parade last Sunday brought over 500 men to the Parish Church. The service was good to see and was better to hear. We venture to believe that the old rafters have never before heard hymns sung with such good will."