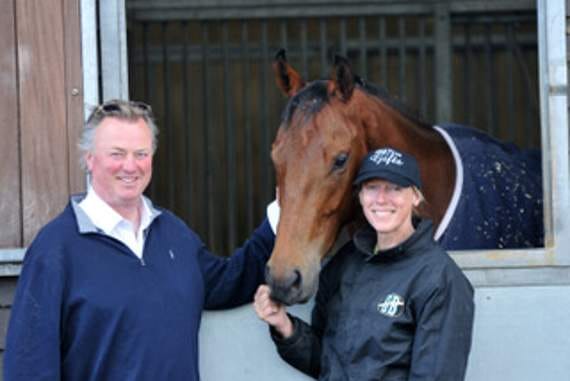 IT’S almost six years to the day since Belgian Bill battled valiantly up the straight to give trainer George Baker his first taste of Royal Ascot success.

The date June 19, 2013, is almost certainly indelibly etched into the mild-mannered handler’s memory. It’s the date his then glorious five-year-old stable star won the famous Royal Hunt Cup cavalry charge and it’s the date that really propelled Baker into the big time.

“I remember Belgian Bill’s Ascot win very well but it was a bit mad and you want to do it again to take it in a bit better,” said Baker, who is based at Robins Farm Stables near Chiddingfold with his wife Candida and a plethora of lovely dogs.

“It was a great day, but like so many people involved in sport will say, perhaps the first time something like that happens you are swept along with the emotion of the moment and perhaps don’t take it all in, but we have great, great memories.”

“A lot of people involved with sport will say thay they have had a defining moment, and Royal Ascot was for us. It’s just so aspirational that you want to do it again,” added Baker, 53, who moved “back home” to Chiddingfold two years ago after spells at Whitsbury in the New Forest and Manton in Wiltshire.

“We knew he (Belgian Bill) was a very good horse when we took him to Royal Ascot,” said Baker.

“He had run disappointingly the race before at Newbury in the Spring Mile for no apparent reason which meant he was a bigger price on the day than perhaps he should have been.

“He’d gone close and been favourite in the race the year before and he’d run well in the Britannia Handicap as a three-year-old, so he was a very classy horse, but that year on the back of that run at Newbury we went there more in hope than expectation.

“But it was when (jockey) James Doyle was just at the beginning of his career and he gave him a peach of a ride. He had a treble that afternoon and it was probably the making of James. His career went stellar from that day.”

Describing Belgian Bill, the son of Exceed and Excel who is now standing at stud at Deauville in France, as a “superstar”, the affable trainer added: “He won in Dubai, he won in Turkey, he won the Betfred Mile at Glorious Goodwood. He was a proper horse so it was no fluke, but going there expecting to win the race? No way!”

George and Candida will be heading back to next week’s showpiece Royal Ascot meeting, which gets under orders on Tuesday, but most likely as sociable and knowledge racing folk who, like many thousands of others, are drawn to arguably the finest spectacle in the racing calendar which takes place every June at the opulent Berkshire track.

Baker does have Crazy Horse entered in the hope of emulating Belgian Bill’s regal success over the Ascot mile but admits that “we need a bit of rain and we need a lot of luck” if the six-year-old is to take his place in the race.

“His legs are slightly made of glass and we need to walk on eggshells a little bit with him and that’s why a soft ground Hunt Cup would be great fun but it’s most unlikely in the middle of June sadly.”

A much more realistic aim for Crazy Horse and a few of his equine pals among the 40-plus inmates at Robins Farm is Glorious Goodwood, which Baker happily admits is his favourite racecourse.

“We love having lots of runners at Goodwood and being the local track we will be majoring on that,” said Baker, a former assitant to trainer Paul Webber. “We need a lot of luck along the way but we’ve got hopefully a few earmarked for the meeting. It’s a wonderful spot.”

So too is Robins Farm, sitting as it does in rural splendour on the outskirts of charming Chiddingfold village on the West Sussex border – making it both accessible and peaceful despite the stresses and strains of a busy industry which sees the Bakers up at 5.30am each morning while regulary burning the midnight oil due to the vagaries of evening racing in the summer.

“I was brought up just the other side of Chiddingfold so this home for me,” said George. “I have very much come home and I’ve dragged my family, my staff and my horses kicking and screaming back to my home, but it’s a great spot.

“Being up at 5.30am in this job isn’t as bad as getting up and getting on the 5.25am train every morning and going to London, but evening racing is tough. Last night we had a runner in the 8.15pm at Kempton. The horse doesn’t leave the track until 9.30pm, the team are back here at 11pm and then it’s up at 5am again the next day.”

Yet despite such long, intense and exhausting work days, the mood around the Robins Farm camp is one of calm and serenity – something the Bakers have been keen to nurture and a state which reflects favourably on the horses.

“The relaxed feel is by design,” said Baker. “Horses that are relaxed aren’t ncessarily going to win you horse races but it’s got to be a good start. Horses are like people, they thrive if you give them a bit of patience and a bit of time and don’t try to force them.”

Candida added: “We have 13 turnout paddocks and love putting the horses out. Sometimes when you go to racing stables the horses are weaving and they are wired, they don’t lie down and they don’t relax, and I think that’s the wonderful thing about this place, they are all pack animals so they can all see each other, which they love, and they are very chilled.”

And it seems to be a policy which suits the owners too.

“We particularly love the older horses, they became established household names, although much more so in National Hunt than Flat. On the Flat you tend to get the comets which whizz across the sport in a year then are gone off to stud, particularly the good ones, in National Hunt racing obviously they don’t have the residual breeding aspect to their careers so you get the old friends who come back year after year after year.

“We tend to have more success with the older horses because we’ve always given our horses time and we’re not necessarily training the instant action, whizz-bang two year olds. If you’ve got a flying machine two-year-old it’s a great thing to have, but we tend to enjoy having horses that we can bring on gradually.”

The Bakers, who have recently set up the George Baker Racing Club, are also adept at placing their happy horses to good effect – as highlighted with succesful overseas raids in Turkey, Dubai and France.

“We have a lot of French-bred horses because it’s very easy to take our horses to run in France geographically from here and the prize money in France is a lot better. If you have a French-bred horse you get a 60 per cent premium on top of the prize money and it’s easier for us to get to Deauville or Chantilly than it is to get to Haydock, Beverley, Thirsk or York, so there are plenty of reasons to have cross-Channel raids,” said Baker, who has previously worked in the City and on a racing paper.

It all seems far removed from the early days when Baker was forced to take something of a punt on his own career.

“I was assistant to Paul Webber in Banbury for three or four years in the early part of the century and then went to a racing paper which I thought was a wonderful job getting paid to go racing. When that folded, things kind of evolved.

“We had a few people who said they would support us and foolishly some of them did. We started with two horses, a hoof pick and a mad dream, and I think it’s the mad dream that keeps you ticking over.”

And Baker, who holds a dual-purpose licence which means he can train National Hunt horses as well as Flat horses, clearly has more dreams to fulfil. “It would be nice to add a Cheltenham winner to the Royal Ascot winner and the Glorious Goodwood winner one day, that would be a dream,” he said.

The thing about mad dreams is that they sometimes come true – just ask Belgian Bill.