Gleave gets Chiddingfold going with career-best 151 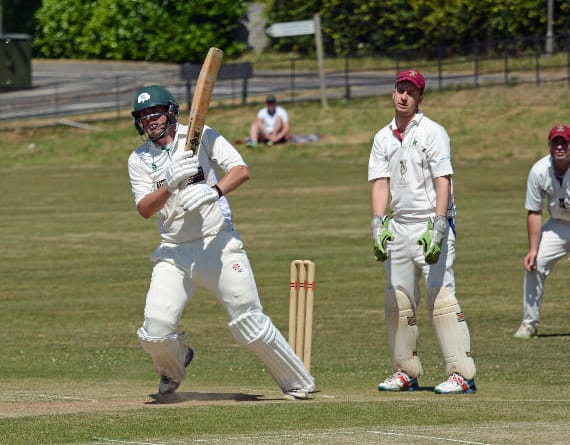 Tom Gleave turns up the heat with another boundary in his superb 151 not out for Chiddingfold. Headley keeper Dave Stone looks somewhat disconsolate. (photo Anthony Ainslie) ()

TOM Gleave joined a select group who have scored 150 in an I’Anson top-flight match and in the process guided Chiddingfold to their first win of the season, lifting them off the bottom of Division One.

They are replaced by Headley who, set a target of 227 at Chiddingfold, came within an over of saving the game as Dave Stone and Graham Badland shared a defiant ninth-wicket stand of 77.

George Ellis inserted the home side, but after a quick breakthrough by Mike Constantaras – he had Dean Spencer caught behind – Gleave steered Chiddingfold to a hefty total, assisted by Matt Wright and Paul Ward in partnerships of 74 and 76.

Gleave’s career-best 151 not out off 124 balls, including 25 fours and three sixes, drew rich praise from skipper Spencer. “It was the best innings I have witnessed in the I’Anson in the 10 years I have been playing in the league. He gave a chance on 140 odd, but that was the only one.

“The thing that made it special was the conditions. It wasn’t a batting paradise by any means. Everyone else struggled as the ball seamed around all day.”

Headley discovered that batting was not easy as Paul Hundley and Chris Howell reduced them to 52-6. Two runs later, Ellis was trapped in front by Neil Garrett for 30 and it looked all over for the visitors. But Stone (41) and Badland (37) showed real application and Headley were within sight of a draw when Howell (4-46 in 11 overs) dismissed both batsmen in quick succession. Headley all out for 140 and 18 welcome points for Chiddingfold.

Grayswood, the clear leaders, and second-placed Frensham remain the only unbeaten teams in all seven divisions and something might give this Saturday when they meet at Hollowdene. Grayswood dispatched Tilford by nine wickets on Saturday, while Frensham had the thin end of a draw at Dogmersfield.

Put in at the Green, Tilford needed a big total, but the only notable partnership was 57 between Chris Wilson (31) and Jake Austin, the latter hitting three consecutive sixes off Henry Hind. But at 92-2, Grayswood skipper Alastair Gloak took a hand, first running out Wilson and then, with no runs added, bowling Austin with his third ball for 43 (33 balls).

The run-rate dried up as wickets fell regularly, mainly to slow bowler Jonny Dow who claimed 4-36 in 13.3 overs, and Tilford subsided to 135 all out in the 48th over.

Iain Jackson and Tom Barnado put on 48 for Grayswood’s first wicket before Nigel Martyn broke through. It was Tilford’s lone success. Thereafter, the visitors strolled to victory as Alex Tucker (45) and Jackson (69) shared an unbroken partnership of 90 and clinched an easeful victory with a six in the 29th over.

Dogmersfield lost the toss, but again showed the depth of their batting as they recovered from a shaky start to post 209-9 at the 45-overs mark. Frensham, hampered by an injury to opening bowler Nick Cobbold, plugged away in the heat, with Tom Charman and Tim Knight each taking three wickets from 14-over stints, but their middle order came good (Dhaniyal 38, W Khan 39, Samad Ayoubi 40) as Dogmersfield posted a defendable score.

At first, it hardly looked enough as George Breddy (36) and Tom Charman took a heavy toll of the opening bowlers. However, skipper Dhaniyal put a sharp brake on the run-rate with a game-changing spell of 3-28 in 14 overs. Charman made 61 and number 6 Ben Maxwell played an important innings of 42 not out and Frensham finished 10 runs behind on 199-7.

Brook came within four runs of beating third-placed Blackheath in an excellent game. Brook’s decision to bowl first looked a good one as Blackheath, despite Australian Mitch O’Dwyer’s 64, slipped to 118-5. However, Josh Cummings (29) was joined by Harry Giles in a vital partnership. Giles made 46 not out and the visitors closed on 198-8 from the 48 overs.

Brook, after a good start, faltered against Peter Melhuish and were similarly in trouble at 129-5. Nick Jackman (44) and the lower order gave it a good go, though, and the home side reached 195-7 from their 42 overs to take eight points to Blackheath’s six.

Saj Hussain played some superb shots in his 94-ball 84 for Puttenham, but Grayshott, having elected to field, bowled well enough on a hard, flat track to restrict the home side to 227-9 in 48 overs. Danny Brown was the most economical, Harrison Ward the most successful with 4-46.

Grayshott lost both Whebles with 46 on the board, but a stand of 109 between Gary Hunt and Nathan Phillimore (41) gave their side a decent chance of victory.

Hunt rode his luck at times, but reached an entertaining 106 from 97 balls before being caught on the boundary.

Matt Jackson was stumped going for the win, and Grayshott came up just seven runs short. A good eight points, though.