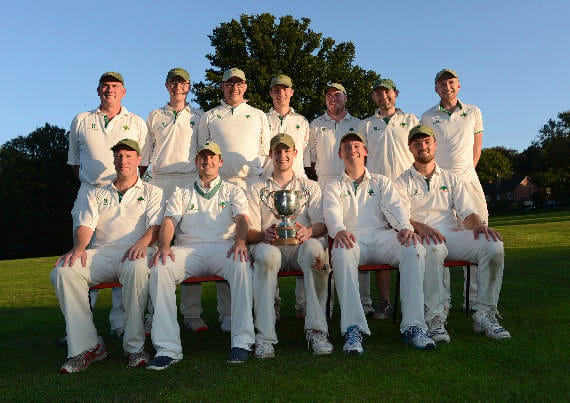 GRAYSWOOD are the ‘invincibles’ of this shortened I’Anson season, beating Headley on Saturday to record win number 13 out of 15 matches played and finish unbeaten champions The other two games were drawn.

The new ten-team Division One had its earliest finish, just creeping into September, although had it lasted another three weeks – as in the case of the 12-team Division Three – the result would probably have been the same, such has been Grayswood’s dominance this hot summer.

Grayswood have now won the I’Anson Cup four times in the last seven years and skipper Alastair Gloak has already declared his side’s intention to make it a hat-trick of titles next season and win the evening Stevens Cup as well, having been edged out by Blackheath in a thrilling final.

Headley elected (boldly) to bat first against the champions, but it was very much business as usual as Cameron Kent (4-12 in 9 overs) and Iain Jackson (3-17 in 9) dismantled the top order.

The innings was in tatters at 21-6 and although the later batsmen scraped up a few runs against the spinners, Headley were bowled out for just 82 in 32 overs.

Grayswood did not have it all quite their own way. Matt Hall roared in to clean-bowl Paul Gillespie and Jackson in quick time and with the champions 10-2, Tom Barnardo had to steady things down. Andy Major would not be inhibited, though, and his 25 off 17 balls, including two sixes, ensured a quick finish. Fittingly, skipper Gloak (13 not out) was with Barnardo (29 not out) when victory was secured in the 20th over.

Later, back at Grayswood, Alastair Gloak received the I’Anson cup from the competition president, Keith Ellis.

Blackheath beat Tilford by seven wickets to finish runners-up, albeit well adrift of the champions. Tilford were inserted at the Green and although Blackheath gave away 28 wides amongst 43 extras, the home batsmen found it a struggle. Mark Ramesar held things together with a solid 47 and some gritty resistance from the tailenders got Tilford up to 171 all out in the 45th over.

Blackheath had no such problems and raced to victory in only 30 overs. Geoff Coombe took an early wicket, but this only brought in Mitch O’Dwyer to join Will Melhuish in a partnership of 88. Nigel Martyn (2-21 in 9 overs) bowled a typically niggardly spell, but Melhuish powered his way to 102 not out off 76 balls, finishing with two successive sixes off Martin Cantwell as the Stevens Cup winners ended the season on a high note.

Relegated Chiddingfold signed off with defeat to Grayshott in a high-scoring game. Tom Gleave hit 81 as the home side posted a creditable 200 against Grayshott’s strong attack.

Gleave then got Andy Wheble cheaply, but Gary Hunt was again in prime form for Grayshott and with the solid Ali Wheble and then the aggressive Nathan Phillimore (49) in support, raced to his second century of the season, this despite a very tight spell by spinner Rob Smith. Hunt’s 102 came off just 88 balls and contained 14 fours and four sixes. Grayshott won by five wickets with nine overs to spare, and they finish third in the table.

Fourth are Frensham who may well have set a record for highest total in the I’Anson, at least in Division?One, with their 380-8 against a ten-man Dogmersfield side.

Even allowing for the short boundaries at Hollowdene, this was prodigious run-making and the chief architect was opener Tom?Charman who plundered 163 off 122 balls, hitting 18 fours and seven sixes. The persevering Miraj Shinwari (4-64) did his best to stem the flow of runs, but Leon Ellen (41), Sam Farncombe (51) and Adam Goulder (37) joined in the fun as Frensham hurtled past and beyond 300.

Dogmersfield took up the challenge, openers Shrestha and Khan both scoring rapid half-centuries before Adam Goulder (3-26) came on to set them back. Sam Charman (3-46) and Tim Knight (3-26) finished the job and the depleted visitors were bowled out for a decent 225 in the last over.

Brook, relegated after one season in the top flight, were dismissed for 113 after deciding to bat against Puttenham. Nick Jackman made a defiant 44 after ‘Sid’ Ahmed had bowled both openers for ducks, but eventually fell to Ali Hussain who took 4-28, Zahid Kamran having plucked out the middle order with 3-14 in seven overs.

Alex Johns had an early success when Puttenham replied, but James Andrews (44) and Aks Ilyas (38) then added 78. Skipper James Crouch (22 not out) ended the game with a flurry of boundaries.